There are two ways to mix and enhance a drum-overhead recording. Since overheads are positioned right over the kit they record every single drum. So one way is to leave it as that and also get some bass and low end from the kick drum and lot’s of power from the snare.

But if the track is recorded as described above we can remove most of the bass and kick-drum with an equalizer. This gives us a lot of control when automising the overhead track to dramatic effects. (Also, we usually have recorded the kick drum on a separate track anyway.)

The aim is now to remove as much bleed without changing the overall sound of the cymbals and high-hat. Even they can become to thin… 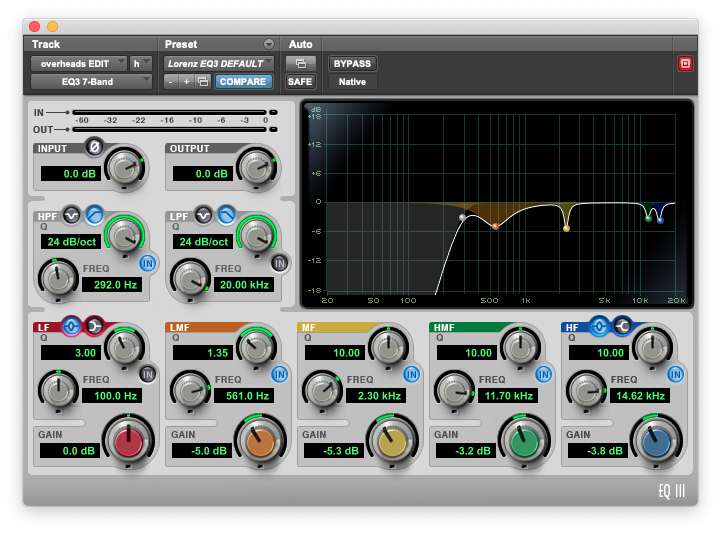 As always, a high pass filter helps to remove most of the bass, kick, and snare. A low pass filter can take away the harshness of the top-end and make it sound warmer and more analogue. But you know that I like to take the hurting resonance out directly with very tight Q-value of a band.

We find more honkyness and „wind“ in the low mids and make a bigger area quieter with a broad cut. Here we loose more of the snare sound and let our ears focus more on the high-hat and cymbals which will be received louder as before.

Another tight cut in the mids cleans up the track even more by removing this resonance.

If you can’t hear problems – go hunting! Solo a frequency band and sweep around until you encounter noises you would prefer not to be there.

Since we take out a lot of material this way the track will be considerably quieter after the eq than before. So make sure to level match and compare before and after a band/the plugin.

In this scenario there is a drastic difference in sound and we perceive the cymbals and high-hat way more without even boosting frequencies! This approach is also often called subtractive EQ and can be compared to cut a statue out of wood. We don’t add anything – we only take away and reveal the beauty.