DenManTau is bohemian dance rock band from Hamburg in Germany. I was allowed to work with them in Berlin while they were giving a concert in the Junction Bar here. As their front of house engineer I provided them with the stage and monitor sound and recorded their show secretly as a gift for them. Of course I got the tracks for myself and yourself to teach you some interesting takeaways. 😉

Paul, the singer, has a pedalboard, for his vocals! He often manually creates special effects and plays with delay and modulation effects. That’s how his vocals got my attention in the first place.

Listening to the recording we notice a few things. There is a lot of bass, windy resonances plosives, side-effects from the pedals and snare-bleed into his microphone. So the aim is to separate the noise from his vocals by removing the issues to reveal the good sonic qualities without having to add anything. 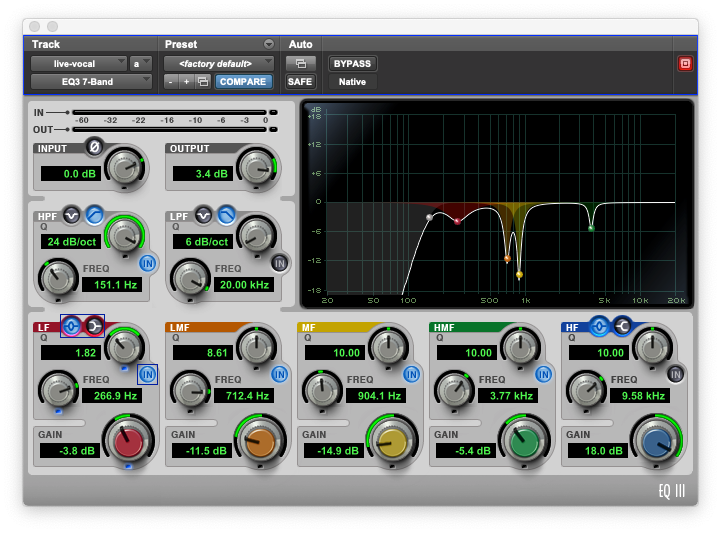 A high pass filter removes bleed from the bass and stage rumble. If you move to far up his voice starts to sound „telephonie“, which we avoid. Now we use all the bands from left to right (red to blue) to get rid of bad neighbours. In the low mids we find a wider area of muddiness and weaken it with a wide Q. Moving up the frequency bands searching for problems, there are two unpleasant low resonances, which may have resulted from somewhere in the signal chain (quality of microphone/cable/pedals/stage-box/mixer etc.). Getting rid of those also weakened the snare-bleed. Instead of a De-esser I often prefer to remove high frequency resonances like on a cymbal overhead track (see this article), but sometimes, like in this mix, the ss of the vocal didn’t annoy me, so I left the final band. More than often, mixing means doing nothing and leaving the track as it is.

Commonly you can find problems by simply boosting a band, sweep around and listen to what sounds bad and then cut it.

By using and „analogue“ EQ, where I can’t see the boost or cut, like the SSL E-Channel Strip, I naturally developed the opposite approach, you could say, and I listen to when the track sounds better, by cutting first and then sweeping around. Comparing by turning the plugin on and off lets you be sure you’ve found a bad spot.

Cutting frequencies simply means making them quieter. Since we cut a lot the track became a lot quieter! To compare fairly to hear the difference before and after the EQ changes we have to lift the level after the EQ with the output knob. Now we are not being fooled and might think the raw recording before the EQ sounds better simply because it is louder. (And we like louder, as our ears like the lows and highs which are being boosted in this case.)